1st September
Got up early as we had planned to set off for the mainland. After doing a few jobs I checked the weather forecast on several sites and eventually decided after much to-ing and fro-ing not to risk setting off in the forecast 6-7 winds.
Decided instead to go for a walk as it was much cooler than of late and asked Ted if he would like to join us. We obtained a pamphlet from the tourist information and set off. Not finding the path we walked by road to Antisami, where we had moored previously. 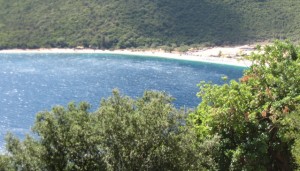 The path back was steep but very beautiful

and at the top were the ruins of an ancient Greek citadel. 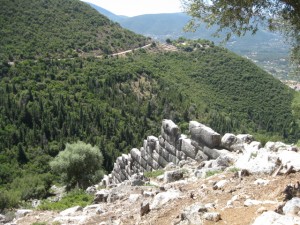 The views were incredible as it was very clear and the citadel impressive. 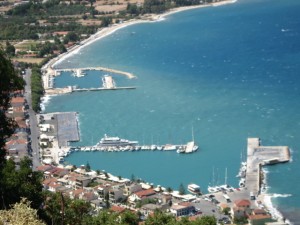 AMZ was still there polluting us all. 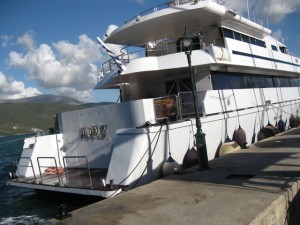 Left Sami into a brisk north-west wind and had a brilliant sail, tacking all the way between Cepholonia and Ithica back to Foki Bay. Unfortunately Rachel didn’t enjoy the trip at all. When we about 3 miles from our destination the steering, which had become progressively slacker and slacker all day, finally gave up – giving us all a terrific fright. We dropped all the sails, started the engine, and inspected the rudders to see if we could handle them manually. We put more hydraulic oil in the reservoir and fortunately we had some steering again. We decided to motor the remaining 3 miles as the wind was not constant anymore but the oil pressure light came on when we were still nearly a mile away, even though I had over-filled the oil. We limped into the bay dropped anchor and soon after our friends D and V appeared. 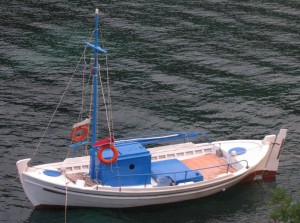 James couldn’t wait to swim and later we had a game of cards and plenteous Metaxa on Zeehund.

southerly wind was forecast and Foki beach wouldn’t be secure.

James and Rachel booked into a room for two nights and we went for a walk to the old lighthouse with D and V. 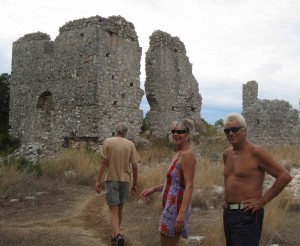 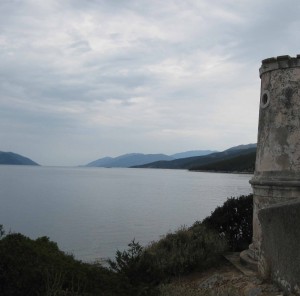 Rachel was feeling better and in the evening we all went aboard Zeehund for a repeat game of cards. We were nearly finished when the boats started leaping around and there was a loud bang which turned out to be one of our stern lines snapping. The swell was huge and all the boats were thrashing about for a while. We took Nine Lives further from the quay and put on a new stern line. The game went unfionished.

Woke to rain and dashed out to shut all the hatches. Lay in bed till late then did the engine oil and tried to sort out the steering. I filled the reservoir and turned the wheel and out bubbled an air/oil mixture. Dave came to look and we tried several times putting more oil in and then moving the wheel, always with the same result. So we know we can’t rely on the manual steering completely. Fortunately the automatic pilot doesn’t, at present, seem to produce the same symptoms. Our plan is to wait here until there is a favourable wind and sail down to Poros, wait there for another favourable day and sail to Zante. J and R decided to get to Zante using ferries as sailing seems to exacerbate her morning sickness.
We four had a nice lunch with D and V before saying goodbye, then J and R took all their stuff ashore. I inspected all the ropes and it would appear that we have lost a mooring rope somewhere.

In the evening we walk back to Foki beach with James and Rachel and have a meal at the taverna, very much a family run affair. 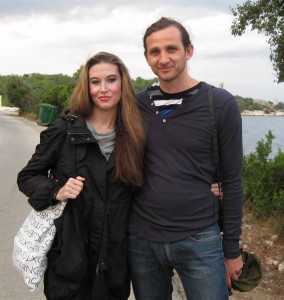 5th September
After checking the weather forecasts on various sites we decide to go for it. Sue gets muddled and says we have a northerly when in fact it’s a southerly. Thinking we should set off ASAP I make an attempt to persuade J and R to come with us, first by text – no response – then in person. Both in bed but agree that it would be much better to sail to Poros than to have to get buses to the other end of the island. When I return I see the south wind which is embarrassing when James appears not long afterwards. Fortunately by the time we are ready to set off the wind has swung. Gentle at first and with a flat calm sea James and I both take swims over the side. Later a north wind gets up and we have a beautiful sail, gull-winging much of the way all the way to Poros.

6th September
Rachel decides she doesn’t want to stay on the boat any more so they pack up and are last seen wheeling and lugging their luggage up towards the town as the ferry is not hill early afternoon.
We set off later than we would have liked and there was an easterly swell causing us to roll about. 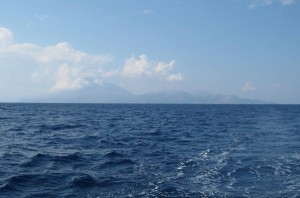 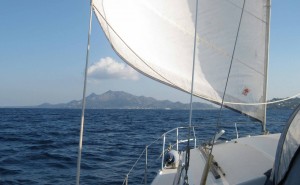 Fortunately the wind picked up after a couple of hours and we had a brilliant sail all the way, arriving at the harbour at about 19.30. I had put the leg down a few hundred metres out but not dropped the sail as the wind picked up again and I knew I could only use the engine for a short while. I also had to steer using automatic pilot. With all these constraints I had neglected to lock the leg so just after Sue had dropped anchor I put the engine into reverse and once again, wrapped the rope round the propeller and stalled the engine. I lowered the dinghy, unwrapped the rope and started the engine again but it seemed ineffective. Upon inspection the propeller had fallen off. Other sailors on the quay helped us take a long line ashore and we moored up successfully. Phew – the last throw – what a note to finish on – perhaps representative of the whole adventure – brilliant sailing but major problems too.

7th September
Managed to contact Mark who will bring out a new propeller with him. Spent the morning on Skype renewing contact with friends back home.
Had a haircut in the afternoon as we wandered around the town. 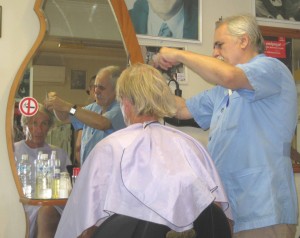 8th September
A lazy day, swimming, reading doing crosswords, chatting to other sailors etc. Started to sort out our possessions ready forgoing home. James and Rachel came over late afternoon to say goodbye as they are going tomorrow. James had taken photos of us leaving Poros from the ferry and arriving in Zante from the quay but when we were just a dot on the horizon in both cases.

9th September
Mark and Francesca arrived for a late lunch with a new propeller and a new gennaker. Mark got straight to work on the steering and the engine – pumping oil out of the latter because I had over filled it and putting more oil in the hydraulic steering. In the evening we changed the genoa – the spare one is in good condition but smaller. Whilst doing this we heard a splash and Francesca saw that someone had fallen in the water. It turned out to be an elderly Dutchman who had fallen off the boarding plank and hit his head. Francesca administered to him and some fellow sailors, part of his party took over. We’re not sure what would have happened to him if we hadn’t happened to be on deck.

After a swim and breakfast started work on fitting the new propeller while Francesca sewed up the larger holes in the chute. Mark continued to bleed the steering system – something I could have done had I known we had a good supply of hydraulic oil. He has done nothing further to the engine and is convinced nothing needs to be done. After the experiences we have had I can only hope he is right but will be unable to explain why we had so many problems. 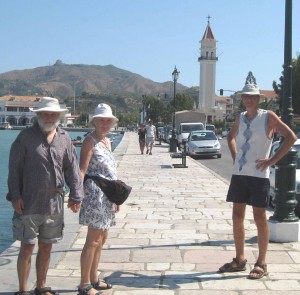 Nine Lives owners back in Greece

Woke to our second day of rain – in 3 1/2 months. Mark checks out the electrical system and Sue packs, Francesca shops and I update the blog. 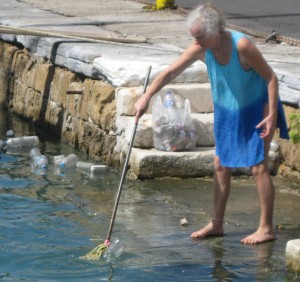 12th September
A rainy start to the day but we go for our last before breakfast swim and shower anyway. Sue finishes off the packing and Mark makes us pancakes for breakfast. We say our goodbyes and then it’s all over – a taxi to the airport. How we’re going to feel when we return we will see. It’s certainly been an amazing experience and, in spite of the problems we have had with the boat, an uplifting one. We’re glad we’ve shared it with so many of our friends and family – at least they will know what we’re talking about. I can’t think I’ll never do this again but there are so many other things we want to do as well and we have lost a lot too – visits to family and friends, rowing, tennis. Sue seems to feel the same as me but she says she’s happy anywhere.
THE END