My parents decided that because I was so unhappy at Windsor Grammar School and so difficult to live with that I should go away to a boarding school. However, they didn’t have a lot of money, nor did they want to single me out for special treatment. Fortunately the Royal Grammar School, which was a direct grant school and therefore offered free tuition, was in Buckinghamshire, the county they lived in, and took boarders – at a price. I went to a boarding house called Tylers Wood which took 33 students and was about a mile away from the school. Many of the other pupils were sons of people in the forces, the British Council or other posts abroad. I settled in there very quickly, meeting a friend who had been in the same class as me at Windsor, Jack Skinner and forming close friendships over the next few years. It was a formative time for my ideas of what life is about and all the important issues were discussed. Also we all enjoyed doing our school work together – we had prep for one and a half hours after tea but did extra work in preparation for our O and A Level exams. 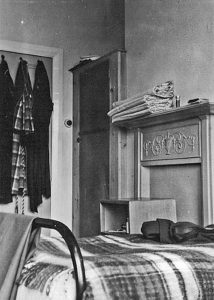 We had all our meals at the boarding house, Tyler’s Wood, so made 4 trips each day. On Sunday’s we were compelled to attend an evening service at the school chapel along with the other boarders. We also had to attend the morning service at the local church. On Saturdays we were allowed into town but had to wear school uniform and on Sunday afternoons we often used to take a walk round the local roads. If we obtained permission we were allowed out on Saturday evening as well. I took up rowing at Marlow Rowing club which meant I could row on Sunday mornings instead of going to church.

The food was quite good, with a cooked lunch, a light tea and supper which consisted on a hot drink and slices of white bread and margarine which we were convinced was made of whale fat. On Sundays we had a roast which the house master used to preside over. It was a weekly feast. The gardener used to grow soft fruits and when strawberries were in season there were plenty. I remember cherries too. We all had a tuck box, mine was inherited from my father who went to Mill Hill school. At the beginning of term I was sent off with various treats, including one of my mother’s cakes – usually a large moist ginger cake.

There was a large dormitory, sleeping 11, for the juniors and 4 smaller ones, sleeping 5 or 6. Each one had a house prefect. We had our own personal rugs and a bedside cabinet, polished bare floor boards and lights out at 9.30. After that we used to listen to Radio Luxembourg and talk, exchanging ideas, philosophies and experiences, often with the prefect – who was allowed a later bedtime – joining in too. Girls featured in these discussions – we fantasised about a girl with dark hair and a red coat who we passed each day as she waited for a bus and we walked to school. Then there were two infamous girls, known as Kipper and Konk. The former was reputed to have danced naked on a table at a local tennis club function. One evening we were told she was waiting for us to do what we liked in a field opposite our boarding house. We sneaked across under the cover of darkness and waited in a queue. I was too embarrassed to manage more than a kiss and a bit of a furtle and I’m sure that was true of most, if not all, of us. Presumably she liked the attention. Konk was available for full sex but she wasn’t pretty and only a couple of guys admitted to taking advantage.
The head boy the first year I was there was an engineering genius and had a lathe in the basement. He made a small working steam engine which I purchased when he left. He also built a ram jet which he flew, with all the other boys as audience, in a metal aeroplane on a wire, belching flames out of the back.
There were tennis courts at the main school which we played on occasionally on summer Sunday evenings. Also I practiced assiduously against the end wall of the boarding house building.
I had a steady girlfriend for the latter part of my stay there. High Wycombe is situated in a steep-sided valley and our school was on one side and the girls equivalent school on the other. Sixth-form dancing classes had been arranged as a point of contact. I eagerly went to these but was too shy to enjoy these or make contact with any of the girls. However, we did go to their school play, The Tempest, and I was picked up by a high school girl that evening. Our relationship lasted 10 months and my mates mocked me for it, I think out of jealousy – they called her Jolly Hockeysticks and said I was her puppet – she was a year above me. She drove and her father lent her his Ford Popular. We explored the countryside of North Buckinghamshire, spending hours lying together in the long grass, kissing and caressing each other, but never below the waist. Then she went off to University and when she came back I finished with her. On our final date I thought I might as well try for more intimacy but was repulsed and we both got upset.

My schoolwork was better at this school and I passed 8 GCE O.Level exams to add to the 2 I’d passed at Windsor. My father was keen for me to go on to read medicine as both he and my mother had but I didn’t want to do this. I did enjoy science subjects though and decided to do Zoology, Botany, Chemistry and Physics at A Level. The school had a new science block and the biology department occupied the top floor and had a very different feel to it in which we all flourished. It was very exciting time to do Biology as the double helix shape of DNA had just been discovered. Our two teachers, Lambert and Little were inspirational and we had an extremely bright group of students. Chemistry and Physics were not at all as exciting or as well taught and I dropped Physics after the first year. I didn’t do as well as I’d hoped, nor as well as most of the class but well enough to consider putting in for Oxford University, where my father had gone. My other classmates took the Cambridge entrance exam, which was just before Christmas I think as the school had a special relationship with one of the colleges (Jesus). I should have done the same to increase my options and gain the experience but the family had always supported Oxford. That entrance exam was just before Easter and I had to stay on at school to take it after most of my classmates had left. I was nearly 19. I stayed in my father’s old college, Lincoln, and managed to pass the theory exams. However, the practical exam completely threw me. We had to dissect a bulls heart to show the valves and I had neither the tools nor the experience to do this. I didn’t like the atmosphere at Oxford. It seemed elitist and old fashioned so wasn’t at all disappointed not to be offered a place.