Penny in the Riley

In the summer my flatmate, Andrew, his girlfriend Ann, Penny and I set off for Spain in the Riley for a 3-week holiday. This turned into a disaster. On the way down the car broke down and it was difficult to get the parts and get it fixed. Andrew and I had disagreements about money. He complained that the car used more petrol than he was expecting and I expected him to contribute towards the running costs. We chose to drive through the Pyrenees which was much more of a challenge than we had realised. We arrived in the foothills on the Spanish side in the dark with only a drop of petrol left in the tank. We went to a local hostelry, knowing no Spanish or anything about Spanish cuisine but ended up with our first paella, ordered by pointing to one of our fellow diners’ food.

Andrew walking past our tent

We camped by the beach, got very sunburnt as it was impossibly hot in the tents and there was no shade. Andrew didn’t want to spend any money so we didn’t do anything but swim and sunbathe. I started to turn on Penny and tried to force her to stop smoking.  I’ve never enjoyed sunbathing on a beach since.

There were some awful English people on the campsite who boasted about their efforts to humiliate their hosts. They seemed to think that because they could speak or understand English very well they were stupid. 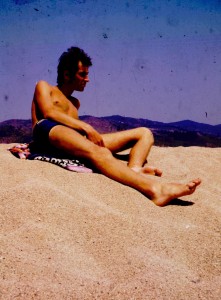