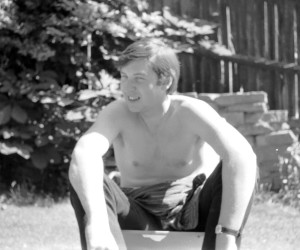 My parents had decided to emigrate to Jamaica as my father had been offered a Professorship in the Physiology Department at the University of the West Indies and they left just after I finished school. A typical teenager I did nothing to sort myself out with a place to live or a job until the very last minute. I ended up in lodgings above a transport cafe and with a job at Eton School at the boathouses. I cycled the 4 miles each way and worked 6 12-hour days and my pay was £15/week one and a half times the national wage of £10. In the school holidays I was employed to sand and varnish oars and boats and in term-time to assist the pupils getting their boats in and out of the water. I soon had enough money to buy a car and purchased for £15 from one of my landladies’ previous tenants a 3-wheeler Morgan in bits. With my friend Mike we attempted to put it back together but had neither the knowledge nor the patience to do so. So when someone offered to take it off my hands for the £15 I’d paid for it I let it go and started looking for a replacement. The local garage had a Ford Prefect van for £20 and a Bentley for £190 and although I was tempted by the Bentley I chose the Ford. If I’d been able to see into the future I’d have kept the Morgan and bought the Bentley!! The Ford was a disaster. It had only 3 forward gears and gate on the second gear had gone so I had to hold it in gear with my knee. I’d only had it a short time when I managed to roll it on a sharp bend and smash it into a tree. Minor injuries only for me and my passengers. I then found a lovely 1933 Singer 9 saloon car which I purchased for £15, including £9 of road tax! This was a wonderful vehicle with two bucket seats in the front and a huge area in the rear, great for entertaining girl friends. It did about 40 mpg and I managed once to average 42 mph in a trip from Bristol to London. I don’t think it ever went faster than 55 mph.

I had a good time in the months March to October between school and University. I had money, friends, including girlfriends. Mike Adkins was a very good friend to me. We could talk for hours into the night and he often invited me back for meals with his family. When he finished school he joined me at the boathouse and we worked together there for several months. I don’t really remember being lonely there even though my brothers,my sister and both my grandmothers had emigrated to Jamaica with my parents. My landlady mothered me and used to provide Mike and I with the most enormous plates of food.

It was quite a wrench when I had to pack all my possessions onto the back seat of the Singer and set off for Bristol University.