I found a boatyard for sale nearby, Longport Wharf. 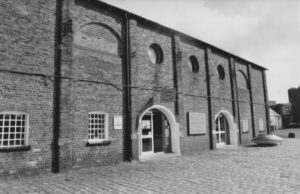 One of the Wharf buildings

I then bought Mike out of Twinram and bought a lease on the Wharf. A certain amount of money for improvements had to spent under the terms of the purchase. There were 3 large buildings on site and I suggested to Mike that he might like to take a lease on one of the buildings and build boats in it. Early in 1980 the 6 boats in our fleet were moved by crane and lorry from Red Bull to Longport (the Harecastle Tunnel was still closed). 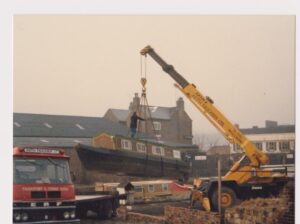 Craning the boats from Red Bull

In addition we ordered four boats to be built by Mike’s new company, Stoke-on-Trent Boatbuilding. These were sold on to investors who then received a proportion of the income. Unfortunately the number of hire boats on the canals had increased considerably and it was no longer possible to achieve the same number of weeks lettings as it had been when we had first set up. And because competition was fiercer more money had to be spent trying to attract customers. In 1983 Twinram hire fleet was transferred to a new company, Sundowner Boats. At the same time a similar sized fleet previously run by Waterways Holidays of Weedon was transferred to the new company. The idea was that by having more boats our advertising budget could increase and become more effective. It proved difficult to run two bases and the sales at Weedon were less than at Longport so at the height of the season we had to meet the boat owners and tell them that the company was not succeeding. They generously allowed the customers to take holidays already paid for before we put the company into voluntary liquidation.

The business developed other interests too, chandlery and brokerage. Barry, who had been Manager, whose heart was in the right place and who was a hard worker unfortunately was not up to complexities of the job. I was not able to give the business the commitment it deserved either. I set on a more experienced Manager, Dave Wilkinson, who also resided in the on-site flat. 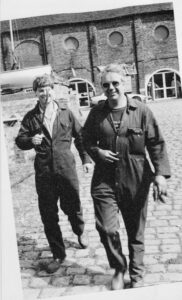 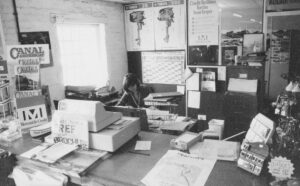 Annie in the office/shop

We made an arrangement with another hire company, Black Prince, to operate their boats at the wharf but this also was unsuccessful so we relied on our other operations to keep us going. Relations with Mike and Stoke-on-Trent Boatbuilding had meanwhile deteriorated and, Bob, who rented out part of the Wharf as an auto-electrical workshop shocked us all by committing suicide.

Sheila, my secretary, had previously worked for Kalamazoo and she suggested we purchase a stock-keeping tool. This manual system was reasonably successful but more importantly taught me the value of keeping stock which I later put to use at Bizar once computerised point of sale systems became available.

Eventually Stoke-on-Trent Boatbuilding purchased a lease of the whole of the wharf from Twinram, just for the price of the stock. Later I was able to sell the head lease to the British Waterways for a substantial sum, making the whole venture profitable. The day to day running of the business had not been profitable and had taken its toll. Dave Wilkinson had done his best but became so stressed there were reports that he had taken it out on his girlfriend, Annie, a lovely girl who had taken over as secretary.