Sunday
Oxford for lunch – bought our own and shared it with Brandy. Uncle Rob arrived about 1.45. Moved on to Ash, arriving around 5pm. Toko and Tim adorable. 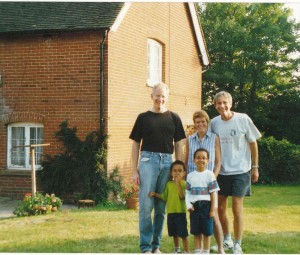 David, Toko, Tim, Sue and me

Ann arrived home at 8.30, ate together. Bed around 1am on bed settee on lounge.

Monday
Late start. Sandwich to buy a tent and card for Toko. Arrived at the tunnel entrance hungry and needing a wee 12.50pm but straight onto le Shuttle and to France before 2pm. Headed towards Brittany with Bill getting progressively grumpier without food as all,the shops were shut. Slow progress behind numerous farm vehicles. Hotel selected for guide book was closed but alternative was delightful – Hotel Aquila at Brionne. Room up spiral,staircase. Offered simple supper. Hotelier mad on animals – struck up rapport. Excellent pre-dinner shower a deux.
Tuesday
Lazy start despite realising neighbours were locked in. Wonderful home-made jam for breakfast. Cat sweatshirt much admired by hotelier and her daughter – would one each for themselves. Wended our way, stopping at Fonjeres for lunch and postcards. Afternoon spent mostly talking/lying in park overlooking the castle. Discussed our future, starting to sort things through. Tried to stop at Canbourg – didn’t like the look of the campsite and no room in hotel. Ended up at LesBruyeres B & B run by Jan and Dave ex of Middlesborough. Recommended small local restaurant in St Pierre where we had simple agreeable reasonably priced meal. Walked around church in the dark. Bill fell asleep early. Sue read till early hours. Bill woke up after nightmare and accepted sufficient solace.
Wednesday
Rushed down to enormous breakfast spread shared with French family of 4 plus 2 Italians. Supplied with sufficient doggy bags to see us through till the following day. Lengthy, chatty waving off by Jan and Dave with detailed instructions into Dinan. Drive to our first campsite at Taden les Hallerous and pitched the tent before Sue sleeping for rest of morning/early afternoon. Drove to Dinan and wondered around an inordinate number of craft shops up Rue du Petit Fort. 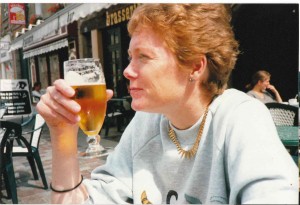 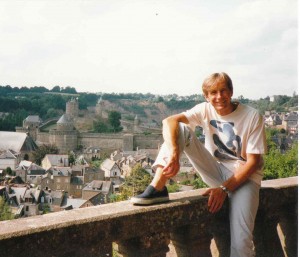 Fell asleep on footpath in park having disturbed guitarist. 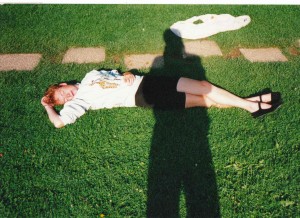 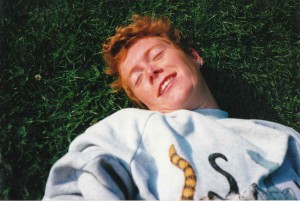 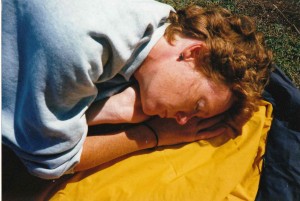 Wandered fairly aimlessly through various exhibitions and church of St Sauveur. Along ramparts. Heard another guitarist/singer who held our attention for a good while. Ate outside in small cafe full of flowers, Siamese cat. Returned to our first home (under canvas) where tossed and turned throughout the night due to rather hard ground and bad drains.
Thursday
Breakfasted on Tuesday’s leftovers (and jam and fresh croissant). Headed for the beach, having bought lunch and obtained money from the hole in the wall in – Pen Guen beach, St Caste. Sue pampered by Bill and left to sleep to try to get rid of a bad head. Bill started getting bad head and grumpiness. Sue bullied into action but indecisive search for chambres d’hôte. Ended up in rather sterile house with charming owners out in the middle of nowhere somewhere near Martignan. 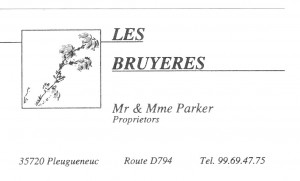 Phoned girls on way to recommend restaurant La Vielle Auberge where enjoyed meal despite feeling under the weather. 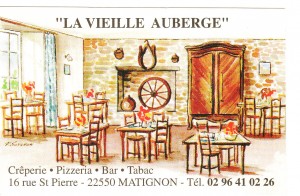 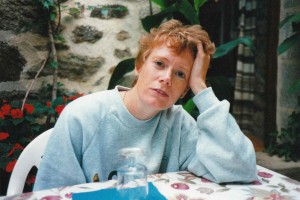 Friday
Overslept. Breakfasted with Catholic priest who’d snored raucously all thought the night. Very genial and enjoyed rabbiting. Recommended Finistere for scenery and churches. Wended our way along the coast. Wonderful walk and talk along the beach at Sables-d’or-les-Pines. Bought lunch there then drove on to Erquy, with headaches improving. Sat and ate watching windsurfers. Eventually moved on to Val Andre and booked in to guidebook recommended Hotel de la Mer. 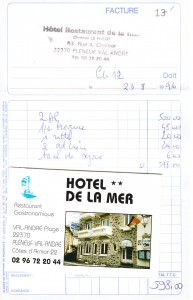 Wandered back along beach in search of bank. Bought Breton ring with inscription A Vous Tourjours – on outside in Breton, on inside in French(became Sue’s wedding ring). Changed travellers cheques in Tourist office. Drank beer and talked outside roadside cafe. Back to hotel for sleep. Bill woke first and Sue pretended not to be awake while he tried to wake her gently with kisses. Another shower followed by delicious seafood meal in hotel – smoked salmon, modules, skewered scallops, chocolate gateau and mint sauce, coffee. Next to grumpy Danish egocentric press photographer and charming Luxembourg couple with cuddly Downs syndrome daughter. Returned to room to write this diary. Bil struggling not to touch me and loving my freckles.
Saturday
Another shower and late breakfast with Luxembourg couple present then off westwards. Sue sleepy. Bill walked round Bicnic harbour desperate for a pee while Sue slept. Made avocado and tuna sandwiches which we ate in the car in the rain. Our plan for the day was to find accommodation close to Brechat Island and Sue took,this seriously directing us to a lovely but full B&B by the sea and her friends grotty house with shower in the garage. Ended up with Bill bad tempered as usual, in Paimpol at a reasonable hotel, l’Origano, in a delightful cobbled area. Wandered round the streets then ate at a crepe rue, trying galettes and crepes for the first and hopefully last time. 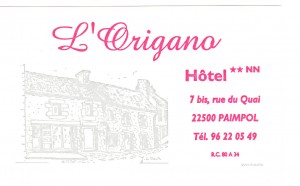 Sunday
Woke up with it raining. Had shower which overflowed and was too small for two! The best croissants and the worst coffee and vile chocolate. Wrote six postcards each as the weather cleared. Drove to Post de l’Arcoest where we found a free parking place. 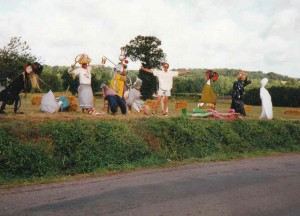 Bill with the scarecrow display

Just missed the ferry and waited in the wind on the quay for the next one. The tide was low and we were dropped off at the end of a long causeway which wound its way towards the port. Surprised by how many houses there were we strolled along the east coast and lunched on an empty slipway in the sun. 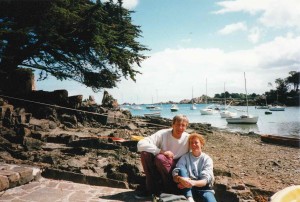 We collected scallop shells and almost got cut off by the tide on a tiny island. 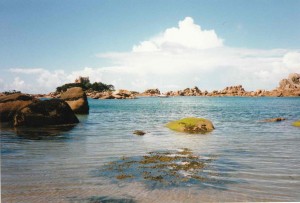 Headed for the lighthouse at the north-eastern extremity but found a boulder strewn beach instead where Sue slept and Bill clambered. 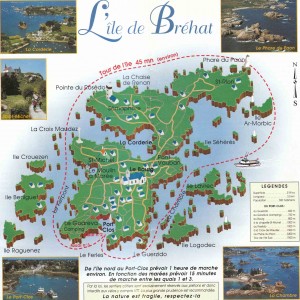 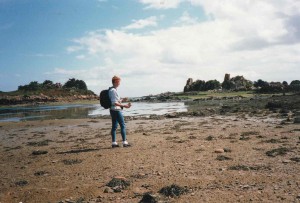 A beer in the port at sixish before catching the ferry back. 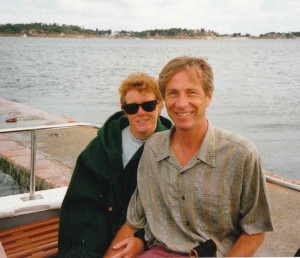 Ate at a lovely restaurant specialising in chargrilled food. Minor calamity with keys. Sue beat me again at scrabble – thinks its not just luck – we’ll see. A long day.
Monday
Bill in foul mood. Stopped at supermarket and bought lunch and presents for Nicola and Alisa. Drove on in silence to Trebeurden and lunched on the beach after talkings through. La y on the beach reading, swam out to boats and back, getting very cold in the process. More sunbathing to get warm then a very amusing game of beach bats which ended when Sue tripped over some seaweed and fell, soaking herself. Drove to Le Ranolin, a recommended campsite near Plouman’ach, busier that we’d have chosen but beautifully situated. 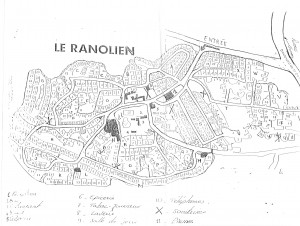 After pitching the tent we phoned the girls and Sue’s parents and had a beer on the cliffs in the evening sunshine. A not very good pizza for a meal.

Tuesday
Decided to stay. Bought breakfast at camp shop and sat in the sun eating it waiting for the tent and towels to dry. Took the coastal path to Plouman’ach beach, a beautiful walk through pink granite boulders. Sat on one for lunch of avocado and mackerel on bread. Afternoon spent lying on the beach although Bill managed to swim out to a rocky island. Chose a restaurant before walking back. The tent was warm and inviting and we christened it. Chose the 4 course 78 franc menu and dined on langoustines, mussels, sea bream, hake and turkey with fruit salad and from age blanc to follow. Back to our little tent where we wrote part of the diary by torchlight.
Wednesday
An early start by our recent standards. On the roads for 10.30 after packing up the tent, showering in the useless, freezing showers, buying and eating breakfast and paying our fees. Off to Treguier market. Park by the river only to find we’d been there before when Bill was in the middle of his big sulk. Anyway spent some time looking for presents for Jo and Carla before buying two woven rucksacks and even longer looking for a handbag for Bill before he gave up. We had a coffee and chocolate in the sunshine in the square, watching the people and listening to the assorted bells of the great dominating church before walking back to the car. The stalls had packed up and the smell was too bad so we drove on for lunch to a little fishing village called Loquivy-de-la-Mer and stopped by some benches overlooking the muddy harbour. We spread out the tent and towels to dry and ate our leftovers. Sue refused to accept she was only entitled to two thirds of the avocado and tomato so poor Bill had to eat his last quarter of baguette dry. Decided to head for St Malone only Sue’s navigational skills deserted her for once and also we were sidetracked. We ended up visiting the impressive Cap Frehel and nearby Forte la Latte along with thousands of other aimless tourists. 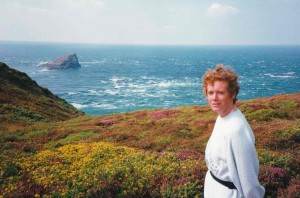 Then a desperate search for a pleasant French hotel with a sea view was at last rewarded in the Vieux Moulin in St Jacut de la Mer. 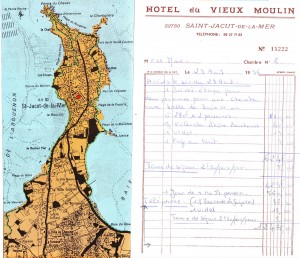 Sue collapsed into tears when Bill started talking about going home and had to be revived by a very apologetic Bill to get to the splendid dining room before last orders at 8.30. After a meal of soup, mackerel, roast beef, cheese and desert we inspected the visitors books and collapsed happy.
Thursday
We’d enjoyed our stay so much we decided to extend it. 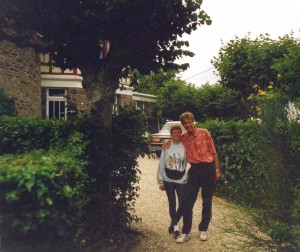 The place had an old world charm and think we can easily make le Shuttle in one day. So we strolled round the peninsula on the soft sand and mud watching the tide recede and collecting shells. After lunch of a shared cheese sandwich at a bar, an inspection of the hotel gardens and a read we both slept, Bill for a modest half hour and Sue (including while Bill wrote this) for most of the afternoon. 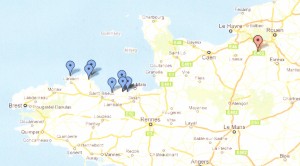