In the summer I went to stay with my parents in Kingston. The local authority paid a contribution to my expenses. I flew (for the first time) to New York on a student charter flight which included a night in a hotel in the city. I then travelled on a Greyhound bus to Maimi – I’d purchased a $99/99 day ticket that allowed unlimited travel and slept on the bus to save money – and flew from there Air Jamaica. I’d recently started to learn the guitar and had taken this with me. 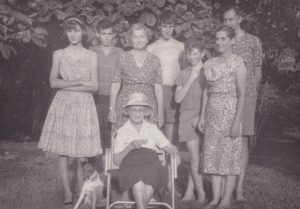 I had a wonderful time in Jamaica. My whole family, brothers, sister, both grandmothers and my parents were all there, housed in a large airy bungalow. The next door neighbours, who were away for much of my stay, lent me a Mini. Two Jamaican girls from the university who had heard of my visit, one of whom was from a wealthy shipping family, took it upon themselves to entertain me and my brother Chris also did his best for me, organising a week-long trip round the island and showing me some of the seedier parts of Kingston. Bob Marley was just starting up at that time and the music and dance, ska, was very exciting. I don’t know if we actually saw him though. 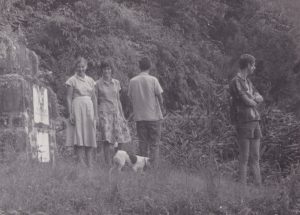 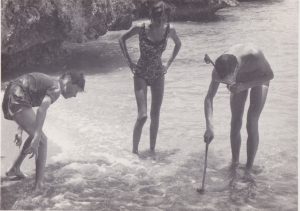 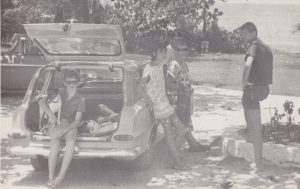 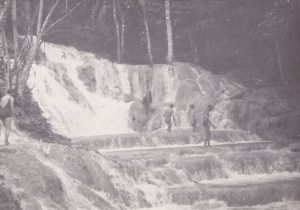 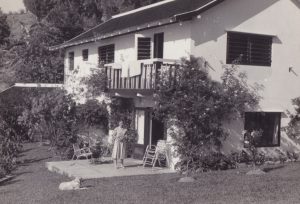 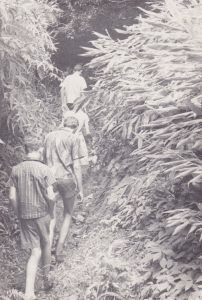 My parents seemed much happier than I’d ever known them then and had an active social life. My father had his own department for the first time and even offered me job prospects working under Tom Goreau on coral reefs. Had I taken it up my life would have been very different! Underneath things were not so rosy – my 2 grandmothers were unable to go anywhere on their own and were jealous of each other and my father was up against anti-white racism.

I also managed to make some money as they were filming “A High Wind In Jamaica” in Discovery Bay and we were employed as extras. We were sailors that were captured by the pirates and had to walk the plank to their ship. They had hired two fabulous old wooden schooners and it was interesting to watch Anthony Quinn and James Coburn in action. I think we were employed for 6 days yet the scene that were filmed in has been cut down so much that we don’t appear in the film at all.

I decided to make the most of my bus ticket and go back via San Fransisco, where my mother’s friend, Auntie Janet lived. I can’t remember much except the deserts in the south, the Rocky mountains and the endless stops in dusty, soulless towns in soulless cafes, morning noon and night. On the last part of the journey the bus became very full and a very attractive girl sat next to me. As we slept we leaned against each other and woke up friends. She was from Lyons, France. We ended up spending the next night in the bus station waiting room and by the time I reached the airport transfer building I was very tired and fell asleep,missing all the calls for the bus to the airport. When I woke up I’d missed my flight. Fortunately the student charter organisation had a spare place on a flight from Montreal next day and the Greyhound bus ticket was valid so I got out of a very tricky situation very lightly.